We all love our glass of pure Riesling, right? Or our blend of Grenache, Syrah and Mourvèdre? A Gemischter Satz, from grape varieties that are ‘mixed’ in the vineyard: also delicious. And accepted. But wine with added spices: heresy!! Wine with other fruit? Barbaric! At least, according to some wine lovers. For them, wine is solely the fermented juice of grapes of Vitis vinifera, and preferably nothing more.

This attitude is not new: in France as early as the 17th century people complained that the English and Dutch made too many additions to wine. The reason for those additions was to guarantee the shelf life of wines or to boost wines of lesser quality. Nevertheless, I cannot help thinking that in earlier centuries consumers were more relaxed in their opinion on wine. And that there were many drinks that where created by mixing wine with other ingredients, without encountering any objections from the consumer. The large quantities of recipes for ‘made’ wines of all kinds that I find in old sources bear witness to this. 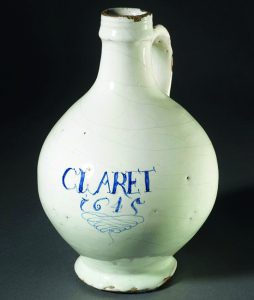 Today I will research a recipe from collector Thomas Sheppey from around 1675; Sheppey found it was better than claret (V.a.452, The Folger Library, recipe courtesy of fellow volunteer Bob Tallaksen).

An artificiall wine like claret, but much better & brisker.​
Take 2 gallons of the best Syder, (Worcestershire red Streak) mingle it with 6 gallons of water: putt to it 8 pound of the best Malaga raisins bruised in a mortar, let them stand close covered in a warm place for the space of a forthnight, stirring them well every 2 dayes: then press out the raysins, and putt the liquor into the same vessell againe: to which add a quart of the juice of Raspberries, and a pinte of the juice of black cherries: cover this liquor with bread spread thick with Mustard, the Mustard side being downward, & so lett it work by the fyre side 3 or 4 dayes: then tunn it up and lett it stand a week; then bottle it up: it is verry pleasant and much wholesomer then french wine.

For Thomas Sheppey, this wine apparently tasted better than a wine from Bordeaux. It was made with apples (cider), raisins, cherries and raspberries. Fermentation was achieved by putting a piece of bread spread with mustard over the fluid. To be honest, I can’t really imagine that this tasted like claret, let alone better than claret. Regardless of the fact that it could have been a pleasant drink. Or is it possible that appearances are deceiving here? Because that is also possible, that there is more to this recipe than appears at first sight. For that, we need to find out more about Thomas Sheppey.

Conversion to the Church of England

Thomas Sheppey must have been born around 1640. He declares to have studied at Pembroke Hall in Cambridge in 1658 in his writings. In 1678 he would change religion: from being a Catholic priest, a member of the Order of St. Francis, and possibly even of the Recollects, he suddenly became a member of the Church of England. How Sheppey could have been a member of the Franciscan Order, one of the first orders banned and abolished by Henry VIII in 1534-38, is still unclear to me. But in any case, after his conversion, Sheppey would be employed as an Anglican ‘chaplain’ with the 3rd Lord Byron (1636-1695).

Sheppey left us with three publications, including a handwritten recipe book. This is titled A book of choice receipts collected from several famous authors a great part in monasteries and often experimented as to a great number of them. The mention of ‘monasteries’ in the title indicates, in my view, that the research for his book began in the days when he was still a Catholic and had access to monasteries. (Which then had to be on the Continent, because in England the monasteries had been abolished. Or did he only have access to books that were previously owned by English monasteries?)
His recipe book mainly contains medicinal recipes, with only a few culinary and household recipes; often the source is mentioned: recipes from various well-known doctors , and as a main source a manuscript of a Lady Byron. This also raises questions: Sheppey only went to work as chaplain to Lord Byron after 1678, when he had become an Anglican. And the manuscript is dated to around 1675 by The Folger Library. Would he have known the Byrons before his conversion, then? An interesting puzzle for a researcher.

Sheppey lived at a time when Catholicism played a major role in English politics. The country had just been through the rule of Oliver Cromwell, and at the head of state was a king again, Charles II (1630-1685). Although Charles was a Protestant, his successor at that time, his brother James, was Catholic. Moreover, there was war with the Netherlands and with France; this resulted in 1666 in a ban on the import of French wines. That ban was lifted again in 1667, but parties within the government continued to demand high import taxes on French wines. That of course annoyed lovers of the famous claret, from the Bordeaux area, and two parties arose, which soon became known as Whigs and Tories. For high import duties on French wines were the Whigs, further supporting a Protestant heir to the throne, the Duke of Monmouth, bastard of Charles II. Against high import taxes where the Tories, supporters of the king’s Catholic brother, the Duke of York. In the excellent book The Politics of Wine in Britain author Charles Ludington explains all these complications and choices extensively.

Moreover, there was also an alleged Catholic conspiracy against the king, the so-called Popish Plot. It is possible that Sheppey was suspected of being involved in this conspiracy at some point; something like that can be read in his writings. In 1678 or 1679, Sheppey wrote Several Weighty Considerations and later, in 1682 a kind of apology, A Seasonable Discourse, in order to explain his conversion and defend against all kinds of allegations .

In light of all this, in my view it is imaginable that Sheppey, at a time in his life that he was thinking about conversion or had already converted, did not want to be associated with the wrong, claret-loving, Catholic party. Hence his choice for a ‘wine like claret, but much better & brisker’ and, moreover, ‘much wholesomer then french wine’.

Thanks to fellow transcribers Elisabeth Chaghafi and Bob Tallaksen for sharing their information on Thomas Sheppey.