For making wine, we are used to containers made of wood, concrete and stainless steel. In Georgia, a very different material is used: clay. Wine has been made in this country for eight millennia now in egg-shaped clay vessels from different sizes, called qvevri. In other parts of the world you will hear the term amphora used for this kind of vessel, but not in Georgia. The qvevri are buried in the ground, so all you see when entering a marani, or wine cellar, is a series of round holes, covered with clay lids, sometimes with a brick circle around the hole to protect the cover.

To my nose and palate, the clay imparts a very special kind of aroma and taste to the qvevri-made wines. Pleasant and earthy, making qvevri-wines really stand out among wines made in ways that are more ‘conventional’ to us. During a recent trip to Georgia, I had the great pleasure to visit Iago’s Winery in Chardakhi, where renowned natural winemaker Iago Bitarishvili makes his deliciously fresh qvevri wines, from the grape variety Chinuri. In his marani, Iago explained about qvevri and wine making. 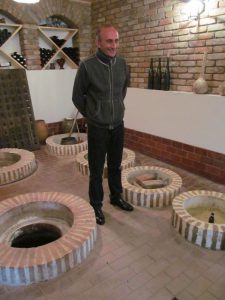 ‘Six of my qvevri are around three hundred years old. That is normal in Georgia. As long as qvevri don’t have a problem, we never change them. The inside is lined with beeswax, which is applied only once.

To harvest, I wait until not only the grapes are ripe, but also the stems. Then I gather the grapes and without pressing, put them in the qvevri. I don’t press because we don’t need to separate the skins and stems and juice. Why don’t we separate? Sometimes in Georgia when old people get together they ask: ‘You make wine without the mother?’ This means without the skin and stems: they are the mother of the wine! Because if we make wine without filtration and without SO2, this method is very important: the stems naturally filter the wine when it settles. Also, from the skins and the stems, the wine gets more fermentation, phenols and tannins, and this is very good for the stability of the wine. 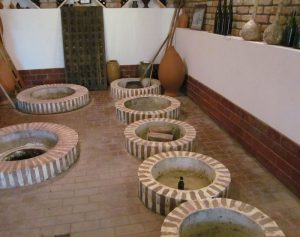 When the fermenting process is finished, we wait for the second (malolactic) fermentation. This takes maybe one month. Then it is end of November, beginning of December and we close the qvevri. How do we do that? We take new clay, and mix it with a little bit of water. Then we cover the opening of the qvevri with the clay, and wait five to six months, depending on the vintage. During this time, the pips, stems and skins settle in the bottom of the qvevri, and after six months, the wine above it is completely clear. When we open the qvevri, we have a naturally filtered wine, which does not need any filtration. Fining is not necessary, because with this kind of winemaking, on the skins, the wine is very stable. Only when we make wine without the skins, fining is sometimes necessary.

After this, we remove the wine to smaller qvevri in another cellar, underground. We close the qvevri and wait, a minimum of five months. And after that we bottle. So for my wine, I need a minimum of eleven months from harvest to bottling. It will be better if we wait two years, for example. But when I have only 3.000 bottles and I sell to several countries, it is very difficult to store it that long. Because after two months I am sold out, like with my vintage of 2013.
I could press the skins, which delivers 25% more wine. Some producers have done that. I have tasted a wine like that, and it was fantastic, at first. But later, when the wine was bottled, it changed and tasted very different. The winemaker asked me what he had done wrong, and after analysing his methods, he realized it was the adding of press wine. Press wine is not good. Instead, we use the stems and remains differently. We go inside the qvevri, remove the skins and stems and the wine that remains, and from that we make chacha (the Georgian equivalent of grappa). 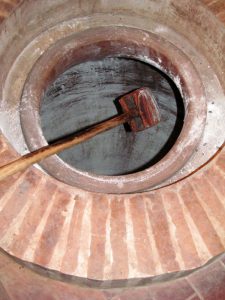 After this we wash the qvevri, and we use lime. Why do I use lime? Against the mushrooms [fungus, mb]. They are mostly on the north side of the inside of the qvevri. They grow because of the difference in temperature in the qvevri from the outside temperature. Two, three weeks before the harvest, we start with the washing. We need a minimum of three, four days for that. In big qvevri, we go inside, in small qvevri we use special tools, like this. This is made of cherry tree bark. We scrub the inside of the qvevri with this, and scrub as long as the water we use is not clear. In the end, I bring the water to a laboratory for analysis, to be sure the qvevri is clean. This is a big problem in qvevri wine making. The insides have to be absolutely clean. If is not clean, the wine tastes like it is corked, but it is not cork taint.

© Mariëlla Beukers – Wijnkronieken. Use of this content is only possible with prior permission of the author.