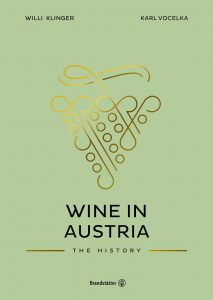 Austrian Wine Marketing Board managing director Willi Klinger last weekend introduced the book Wine in Austria: the History in Vienna, as the centrepiece of this year’s Austrian Wine Summit. For the first time an academically substantiated and comprehensive volume on the history of viticulture in Austria, from prehistoric times to the present day, will be available as of December this year. And there is an individual chapter devoted to the life and work of Dr Friedrich Zweigelt.

More than two and a half years of work went into creating the 500-page book, which was commissioned by Willi Klinger and came to fruition under the academic aegis of Professor Dr Karl Vocelka, to be published by Brandstätter Verlag in December. Mr Klinger comments, with clear enthusiasm: “More than thirty authors worked to illuminate the long and rich history of Austrian wine in all its facets in this handsome volume. Grape varieties, cultivation and cellar techniques, the role of wine in religion and traditions, the emergence of the Austrian winegrowing regions and the successful developments after 1985 – these are just a few of the aspects that are examined. For the first time, an authoritative account of the historical and cultural significance of wine in Austria is available in this work.”

The authors also addressed some of the challenging topics in Austria’s vinous history in detail, adhering to the strictest possible academic standards. In a dedicated chapter, for example, German journalist Dr Daniel Deckers examines the much-discussed career of Dr Friedrich Zweigelt (1888–1964); in the course of his meticulous research in various archives, Deckers encountered information that had not previously come to light. Mr Klinger sums it up: “With the presentation of Dr Daniel Deckers’s Zweigelt study, the AWMB makes an important contribution to the reappraisal of the topic and thus provides the political decision makers for the winegrowing sector with the basis for considering the further course of action, which can be determined in a subsequent step.”

Austrian viticulture in the wake of 1918

Another essential chapter of the book is devoted to the influence upon viticulture exerted by the collapse of the Habsburg monarchy in 1918 and the new border demarcations established at the peace negotiations in the Paris suburbs in 1919.