Driving four hours from Athens to a far corner of the Peloponnese, especially to see where a particular wine came from, seems like a crazy thing to do. But those of you who have been to the huge rock where Monemvasia is hidden, will immediately understand. Monemvasia, literally ‘only entrance’, is the medieval town that gave its name to the most famous sweet wine of all time: malvasia (Italian, Spanish), malmsey (English), malvesye (Dutch) and malvoisie (French). You find Monemvasia in the extreme southeast of the Peloponnese, in the district of Lakonia, on a huge rock in the sea, only connected to the mainland by a narrow bridge.

To enter Monemvasia, there is still only one entrance: a tiny gateway at the end of a 2 km long road along the south shore of the huge rock, rising 300 meter above the sea. Driving across the bridge which connects the big rock to the mainland, the visitor is kept completely in the dark about the town. When you finally arrive at the gate and anticipation has risen to peak levels, you still see nothing. A massive stone wall with parapets, stretching up halfway up to the top of the rock and down to the sea, blocks your view. To enter, you have to pass a modest gatehouse, with two right angles in it, which prevents peering inside the gate. Only pedestrians, and the occasional cat, dog or mule, can enter.

Finally inside this historic place, you enter a different world. Gone is the 21th century, with its toll roads, traffic, and gas stations. Cobbled stones, tiny houses, more than 20 churches, a few inns and restaurants, and a handful of shops are what is awaiting you ‒ and the most magical atmosphere I have ever come across. Because, in the last few decades, Monemvasia has been beautifully restored, and no modern architecture disturbs the historic buildings. Especially in early season, when the tourist population staying overnight is very limited, and at dusk, when the day trippers leave the town and walk to their cars, it is overwhelming to wander around and take it all in.

Moreover, high above the present-day town where everyone lives and works and where the action is, there is yet another town, the Upper Town. In past centuries, the high and mighty lived there, for example the Ottoman overlords, from 1540 to 1690 and from 1715 to 1821. Now, only the wind reigns there, together with a multitude of rare flora and fauna. And the caretaker of the beautiful medieval church of Agia Sophia, a copy of the more famous one in Istanbul. This upper town can only be reached by a very steep climb, over cobbled stones worn slick by ages of footsteps. The reward is enormous though: from the upper town you can see the whole of ‘down town’ spread out below you. Moreover, a walk through the ruins of the upper town leads along the most amazing flowers and plants, with the wind constantly trying to push you over the edge of the path.

In earlier centuries it must have been a lively and totally different place. From the first mentions in history, Monemvasia has been an shipping and trading centre. The rock is very strategically placed in the Aegean, and commands views and shipping lanes north, east and south. Its inhabitants where traders and sailors, and one of its most valuable commodities was wine: the famous Monemvasia oinos, or wine from Monemvasia (oinos is the Greek word for wine). First mention of this wine dates from 1214, when the town was part of the Byzantine Empire. 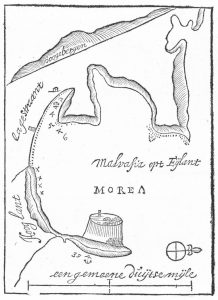 In those days, the famous Arab geographer Idrisi mentions the town and calls it ‘Maliassa’ or ‘Malbasa’. Italian visitors and conquerors would do the same, and the name started appearing on maps as Malvasia. There is an early map by Dutchman Pieter Goos (1616-1675) for example, where the rock is called ‘Malvasia on the island’.  Later western European maps would mostly use the name Malvasia for the rock city.

It were the Venetians who would play the most important role in the history of famous wine. The maritime power of Venice was part of the western alliance that laid claim to big parts of Greece from 1204 onwards, after the Fourth Crusade. The city of Venice acquired several important possessions: the ports of Methone and Corone on the southwest coast of the Peloponnese, the island of Crete, and for a time, from 1454 till 1540 and from 1690 till 1715, Monemvasia itself. And being the traders they were, it did not take long for the wine of Monemvasia to become known in the west.

Monemvasia oinos was sweet, made in the way already described by ancient authors. The grapes were dried in the sun, and pressed after they had shrivelled due to the evaporation of moisture, thereby raising the sugar levels. The vineyards were on the mainland, fermentation and storage was on the rock, according to one modern author. Production in Monemvasia itself continued until the middle of the 16th century, after which the Turks forbade it and the tradition went into decline.

Nowadays, we are of course very interested in the grape varieties that made up Monemvasia oinos. But like with most wines from the middle ages, we don’t know! There are other things we do know, however, and one is that Monemvasia oinos was not made up of one of the many grape varieties we now call Malvasia! Although there is a definite link between the Monemvasia oinos and the wines that were soon called malvasia, the exact nature of that connection is the topic of many scholarly debates, articles and symposiums.

Since Monemvasia was not always in their possession, the Venetians began to produce sweet wine in other regions, and that wine also became known as malvasia. On Crete, there already was wine production, which the Venetians expanded. Especially from the 16th century (so after the decline of the real Monemvasia malvasia started) Cretan malvasia wines became popular. We find them mentioned in early 17th century price lists of the Amsterdam Exchange, for example. Also, there are several descriptions of 17th century travellers, French and Dutch among them, that tell us how these malvasias in Candia (an old name for Crete) were made. 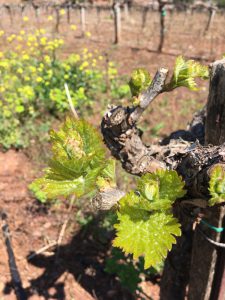 As malvasia wines spread to the west and northwest of the continent, their reputation grew, and kings, nobles and rich burghers wanted to sip malvasia while enjoying some sweets, nuts and fruits. Soon, malvasia was made not only in Monemvasia and on Crete but also in Italy, Spain, Madeira, and on the Canary Islands. All were imitating the original Monemvasia malvasia, but were most assuredly not produced from the same grape material. Malvasia became a generic name, a type of wine, or maybe we can even call it a trade mark. Compare it to champagne in the 19th century, before the appellation laws were installed. ‘Champagne’ then was often used as a name for sparkling wine produced in other regions and countries. Producers used the same technique as real champagne, but with different grape varieties.

That several of the grape varieties the wine malvasia was made of became known as a ‘Malvasia’, is a logical development. Already in the 15th century a grape variety we now call Malvasia Candida was introduced to Madeira. Recent DNA studies have shown that several other Malvasia Somethings, for example Malvasia de Sitges in Catalonia and Malvasia di Lipari from the Lipari archipelago off the coast of Sicily, are one and the same. But so far, a Greek origin of this grape has not been found. The most widespread Malvasia in Italy is Malvasia Bianca di Candia. The name suggests it originated from Crete, but also in this case there is no genetic evidence to prove this. A very complex story, about which the last word has not yet been spoken!

Coming back to the original Monemvasia oinos: we don’t really know which grapes were used to produce this wine. But in the late nineties of the last century, Monemvasia oinos fascinated George Tsibidis from the small village of Velies, 15 km inland from Monemvasia. He decided to become a winemaker, established Monemvasia Winery and made it his mission to try to find the lost varieties of the original Monemvasia malvasia. For years, he toured the local vineyards and with the help of researchers identified over 20 local grape varieties. Through a process of elimination, he ended up with four possible candidates for the Monemvasia malvasia: Kydonitsa, Assyrtiko, Asproudi and a variety called Monemvassia (please note the double s: not a typo). This last grape has survived mainly on the island of Paros, but was brought back to Lakonia by Tsibidis. Although the name ‘Monemvassia’ might suggest a link with a modern Malvasia Something, DNA analysis established that there is no relationship. This further strengthens the idea that in earlier centuries malvasia was for a long time used to describe a type of wine (sweet, from dried grapes) and not the grape variety used to make the wine. 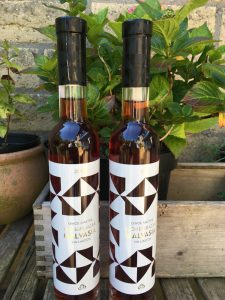 Tsibidis decided to make his modern Monemvasia malvasia from Monemvassia, Kydonitsa, Asproudi and Assyrtiko, reasoning that in the past centuries it could as easily have been a blend, and not just one variety. He planted his vineyards with those varieties, and made his first historical wine in 2010, which came on the market in 2014. Tsibidis also successfully lobbied for the installation of a new PDO in Lakonia: the PDO Monemvasia Malvasia, recognizing the centuries old tradition of sweet wine making in the region. The new PDO was announced on 23 July 2010 (the day the town of Monemvasia annually celebrates its independence from the Turks) and is only valid for sweet wines made from sun-dried grapes, fortified or unfortified. Allowed varieties are the four that went into Tsibidis’ Monemvasia malvasia. The Monemvassia variety has to make out the majority: at least 51%.

Wines from Monemvassia can be full-bodied and low in acidity, with high alcohol levels. Good wines are spicy and modestly aromatic. To gain more acidity in the Monemvasia Malvasia blend, Tsibidis picks his grapes early. The grapes are sun-dried for 10 to 12 days; after fermentation, they age for 24 months in used oak barrels. In the future, the time in barrel (and in bottle) will probably increase. According to the new PDO, a Monemvasia Malvasia can only be released after 4 years of total aging, barrel and bottle together.

There was really only one reason we came to Monemvasia and that was of course to taste the famous wine in the surroundings where it originated, then and now. And I can tell you, tasting Monemvasia Malvasia in the town of Monemvasia itself was an thrilling experience! Due to unforeseen circumstances, our meeting with the Tsibidis family at the winery could not take place. They had arranged however for us to taste in Byron’s Camara, an historic tasting room hidden in one of the tiny streets of Monemvasia. There we discovered the delicious dry wines of the Tsibidis family, which deserve to be known as well. Especially the Kydonitsa and the complex and rich blend Akra Minoa are my favourites. However, the highlight of the afternoon was the tasting of the vin liastos, the sweet wine, 2012 Monemvasia Malvasia. It’s difficult to describe what I felt, but it surely was a special moment. This wine is rich in aroma and flavour, and enchants you with its rich orange colour. As you taste the wine, you discover spices, nuts, apricots, quinces and other dried fruits. The wine has a pleasant acidity and is perfectly balanced. Each sip invites you to another, and the aftertaste is gorgeous. And then to think that the city magistrates of my home town Utrecht around 1450 regularly drank malvasia! If that was anything like this modern Monemvasia Malvasia, life cannot have been all that bad in those days. 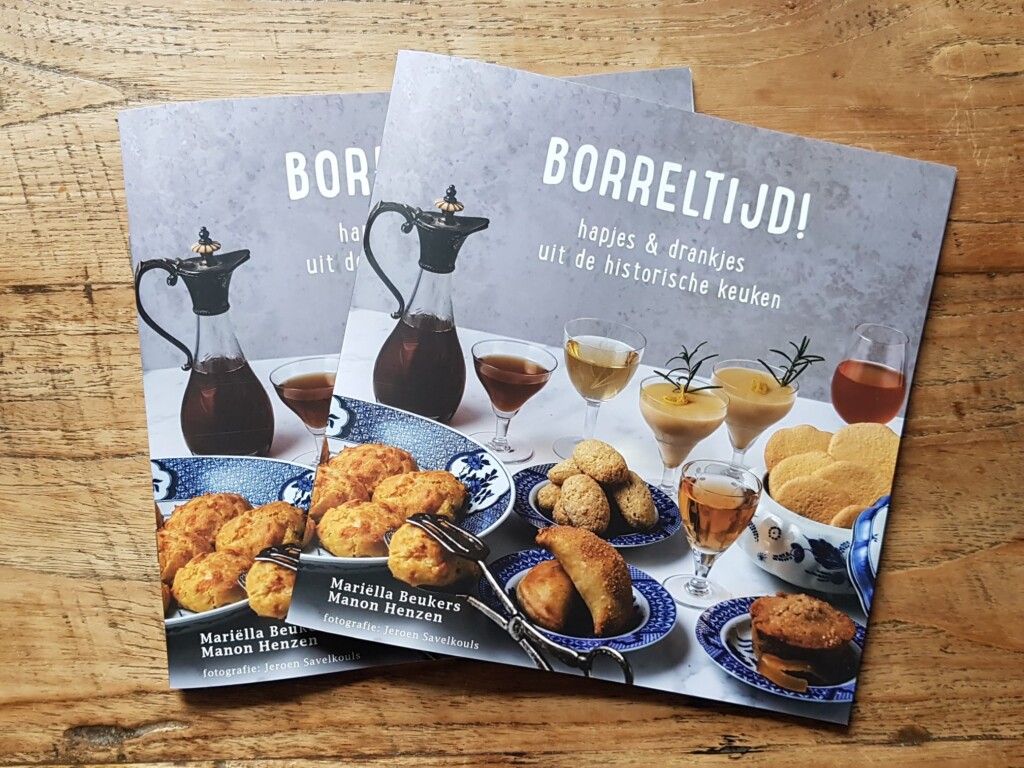