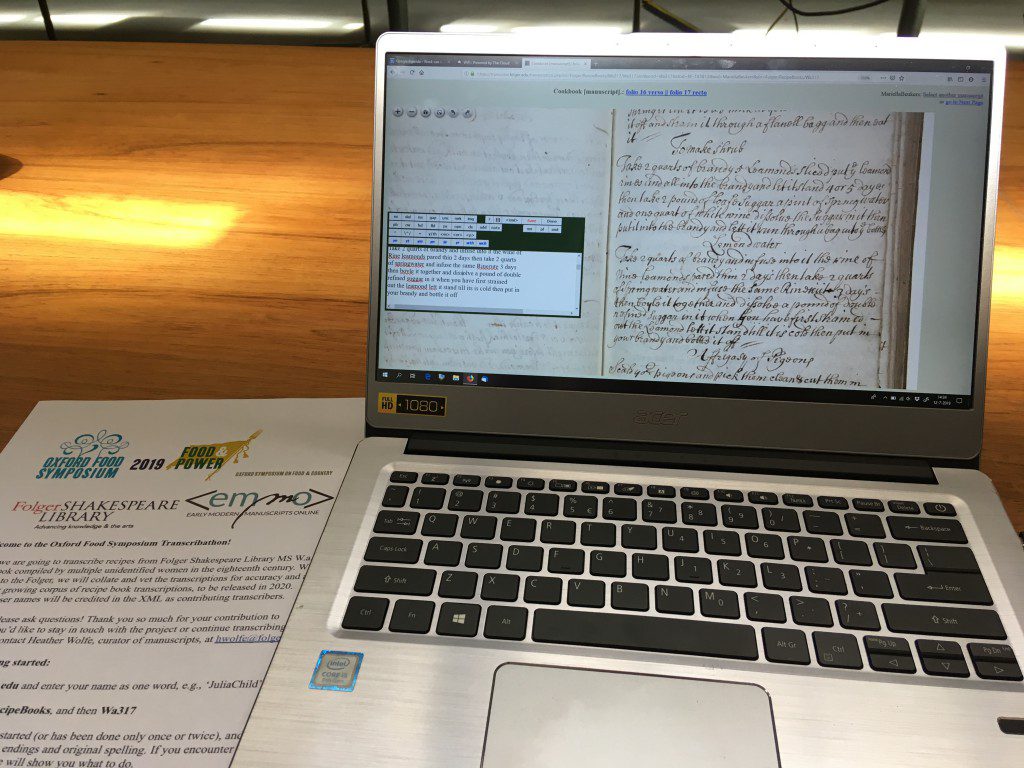 What could be more fun than reading 18th century recipes, both for food and (fruit)wines? Actually, transcribing 18th century recipes for food and wine! I fear I have a new hobby, maybe even a new addiction: transcribing 18th century cookery manuscripts in the English language, collected by the Folger Shakespeare Library in Washington DC. After I returned from the Oxford Symposium on Food in July, I became a volunteer for the Folger Library and began to participate in typing in page after page of the recipes, luckily written in fairly legible hands. The transcribing brings you into very close contact with the person who originally wrote it, some 300 years ago. Often a woman at that too, which is a rare thing in the early modern period: to hear a woman’s voice.

Just prior to the symposium, Amanda Herbert and Heather Wolfe of Folger Shakespeare Library had organized a transcribathon, in which I took part. We could transcribe pages of manuscripts residing in the Library, recently digitized. With a small group of people, we got to know the wonderful Dromio interface, and could try our hand at several pages of an anonymous manuscript with call number Wa 317, from somewhere between 1700 and 1775. I was hooked the minute I found a recipe for shrub (here: a drink based on brandy, lemon juice and sugar, also known as punch; later shrub also acquired other meanings). After I came back home, I joined the small group  of volunteers already working on other manuscripts, and at the moment I am a veteran of around 5 or 6 recipe books. Very soon, I also started to search for recipes for ‘wine’ and drinks in those manuscripts, and found an amazing lot of them. I will go into that topic another time.

The Folger Library was instituted in 1932 by Henry and Emily Folger, and initially contained their collection of works of and around the English play wright William Shakespeare. Now, in the 21st century, the Library has grown into an important international research institute, with a focus on early modern society. From the beginning the Library also contained a collection of English cookery manuscripts. I asked Heather Wolfe, curator of manuscripts, about them: “Henry and Emily Folger acquired a number of manuscript receipt books, and we have continued to acquire them since we opened in 1932, with a real burst in deliberate acquisition in the past decade. I see this as a way to get more women’s voices into the ‘archive’.”

Before Farm to Table

Recently, a research programme was started: Before ‘Farm to Table’: Early Modern Foodways and Cultures. This programme ‘will use the pervasiveness of food in everyday life as a window into early modern culture. Food, then as now, is a basic human need. It also has a history and is a gateway to understanding society and culture.’ Several activities have already been organized, among others an exhibition this spring, titled First Chefs. Amanda and Heather gave an inspiring presentation of the exhibition and the projects that were part of it during the Oxford Symposium.

The digitizing and transcribing of the cookery manuscripts is also part of Before Farm to Table. Heather Wolfe: ‘We are transcribing the recipe books for two projects: Before Farm to Table and Early Modern Manuscripts Online (emmo.folger.edu). The aim is to create a corpus of transcriptions of all of our recipe books, starting with a beta corpus of roughly 25 marked up in TEI and all available as raw text files. Volunteer transcribers from transcribathons and Shakespeare’s World, as well as from Folger and EMROC classrooms and Folger docents, have provided us with the texts.’

I myself also plan to use the manuscripts of the Folger Library, which can be accessed by everyone online, for further research into the history of drinks and wine. One small article is already ‘brewing’ in my head, and will look into connections between handwritten English manuscripts and printed English cookbooks on the one hand and printed cookbooks in the Netherlands on the other.

To finish, I give you a few of the recipes I have come across and transcribed. They are all three from ms Wa 315, written by Dorothy Stone around 1700.

To make a Gillimofercy​
Take 4 or 5 Salt herrings out of the pickle and mince
it very small, take out the bones and take 4 apples &
mince them, and take a Couple of Lemons and mince them
Pill and all 3 or 4 onions minced, and Pepper Oyles and
Vinegar and so Eate it.

At first, I had no idea what ‘Gillimofercy’ meant. Luckily, one of the other volunteers, Elisabeth (based in Germany), came up with gallimaufray, or a hotchpotch. A recipe with all kinds of things mixed together, deriving its name from middle French galimafree, a 16th century meat stew.

To make Samphier Pye Ditt​o​
​First pick your Samphier very clean from the Knots
then lay it in water for 24 Hours, changeing the water
2 or 3 times, Shred it small, then take 2 or 4 Eggs beaten
and a little graterd bread, some Sugar, some clouted
creame, Cittern, some Raisins, and Currans, and some
Sack, mix all these togather with the Samphier &
so make the pye.

A pie of samphire (for my Dutch readers: zeekraal!), who would have thought that. With sack (sherry), raisins and currants. I might try this one day; I think the result will be more of an omelet then a pie.

And then on a more alchemistic note:

To make the Golden Water
Take an ounce of spirit of Saffern, one dram of
oyle of cloves, one dram of the best sented Alkerms
one pound of the double best refin’d Sugar beaten
very fine. 2 quarts of good nants​ Brandy, first
put the Sugar into an Earthen pot, that maybe
cover’d very close, than put the Saffern, cloves, &
Alkermes into the Sugar, and with a Spoon mix them
all togather, then put in the Brandy stirr it very
well all togather (all one way) then cover it very
close and then put it into Bottles clear from
the settlings, you may put more Brandy to the
Settlings which will be good tho not so strong.
If you please add leaf gold to it broken with a
little Sugar and put to it in the Bottles.

This recipe is based on ‘al kermes’ or ‘al chermes’, meaning cochineal, an insect that for centuries was used as a colouring agent. In this case, for a drink flavoured with several spices. According to Wikipedia, a liquor called Alchermes of a very scarlet or carmine colour was still made in Italy around 1900. Also, this drink was a modification of an 8th-century tonic confectio alchermes  and the ‘al’ points to an Arabic origin. A special touch to me is the ‘nants Brandy’: brandy from Nantes. Making brandy, or burned wine, was an industry started by the Dutch in Nantes in the early 17th century. The gold leaves at the end of this recipe mark it as a not-every-day drink. It was undoubtedly more a medicine or a potion than a thirst quencher.